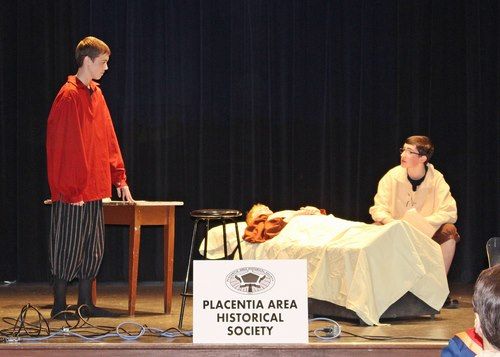 Close to fifty people turned out at the Arts Centre in Placentia on Thursday, May 15, for the commemoration, by the Placentia Area Historical Society, of a Basque Will that had been written in Placentia 451 years ago.(photos)

Written on May 15, 1563 for a Basque sailor who was dying, the Will asked that he, Domingo de Luca, be buried in Placentia. It is now believed to be the oldest original civil document penned in Canada.

The commemoration opened with a proclamation by Town Crier, Angus Gilbert. The master of ceremonies, historical society president Tom O’Keefe, then introduced Archaeologist Stephen Mills who gave a talk on the Basque in early Newfoundland accompanied by a slide show. This was followed with a short skit by high school students Patrick Pearson, Nathan Hynes and Jordan Power, on the last hours of de Luca’s life.

A framed photo of the Will, the original of which is an archive in Spain, was then unveiled by Deputy Mayor Keith Pearson and President Tom O’Keefe. That was followed by the reading of a message of greetings from the Mayor of Hondarribia, Spain, the town of Domingo de Luca’s origin. Mayor Wayne Power of Placentia then spoke on the event and congratulated the historical society for their efforts. Members of the audience were given an opportunity for comments and questions. This was followed by the cutting of a cake with a Basque flag on it by Heather O’Keefe, the newest member of the historical society, before the group broke to enjoy the refreshments that had been provided.

The Will commemorated at this event was found in Spain and translated by Dr. Michael Barkham. Funds were provided by the Department of Tourism, Recreation and Culture and the Placentia Lions Club for the report provided to the Placentia Area Historical Society. Funds were also provided from the Cultural Events program to help run the event.

We have 171 guests and no members online