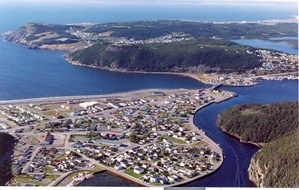 Placentia is situated on the west coast of the Avalon Peninsula, about 120 kilometres from St. John's. Placentia Bay is 88 kilometres wide and 144 kilometres long. The bay leads to a long channel into a splendid natural harbour. The extensive anchorage and spacious beaches are ideal for drying codfish. The entrance to the harbour is guarded by a narrow "gut" less than 100 metres wide which acted as a great barrier to protect the ships in the harbour from attack. Only one ship can pass through this "gut" at a time. The harbour can hold over 150 fishing vessels and extends into the Northeast and Southeast Arms. Placentia is protected by a range of hills that shelter the town. There are many ponds and rivers that provided the early inhabitants with freshwater. It is for these reasons that Lord Vere Beauclerk in 1728 described Placentia as "the most commodious harbour and finest beach in the world".

The struggle for Placentia in the sixteenth century involved the desperate fight for power between European nations for supremacy in the New World. The importance of Placentia relates to the importance of fish to the European markets. The capability of prolonged conservation made it possible to preserve food on transatlantic voyages to markets in Europe. The fishery was easy and cheap to exploit. Placentia's physical geography made it one of Newfoundland's busiest settlements in the seventeenth century and the largest on the south coast. Because of its relatively central location in relation to the south coast settlements, and its size, Placentia was chosen as the administrative centre for the region and as the base of a resident fishery.

Placentia attracted fishermen from a wide variety of places along the European shore, from the Basque country in southwest France, Spain and Portugal in the south, the Atlantic coast of France, Brittany, Normandy, the French interior, and, after 1713, from southwest England and southeast Ireland. They frequented Placentia to fish and to dry their catches. Placentia was by far the largest of some two dozen planter communities of French derivation along the south coast of Newfoundland, extending from Trepassey on the border of the English shore west to St.Pierre and into Fortune Bay.

We have 115 guests and no members online