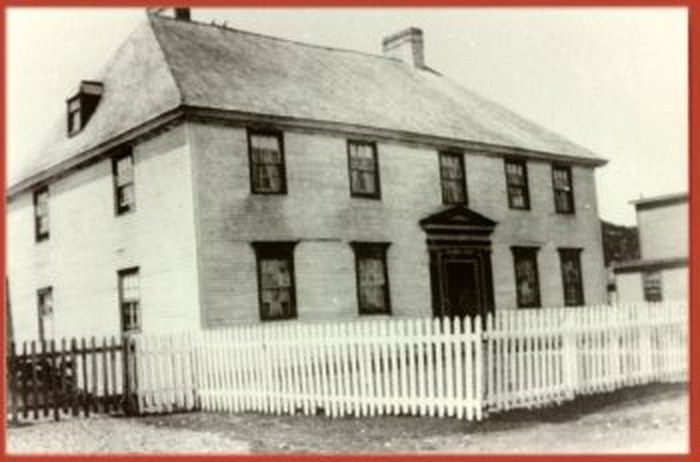 Roger F. Sweetman (That should say Pierce Sweetman as Roger was not born at that time. Ed) built Blenheim House shortly after he arrived in Placentia in 1780 to manage the family business. The year of construction was 1786. Built in a tradition similar to the West Country houses, it had a prominent hipped roof. One of the most unique characteristics of the house, besides its huge size, was that the partitions were lined with bricks. These bricks were half as large again as those commonly used in construction and apparently used for insulation purposes. This house was built on the most fertile piece of land in Placentia and surrounded by a beautiful lawn. It is reported that the soil for the lawn was brought over from Ireland in bags on Sweetman's ships primarily for that purpose. [It is also possible that these bags of soil were used as ballast for the ships enroute to Placentia.] Sweetman built this huge mansion with materials that he brought, precut from Ireland. This house was a similar design of Roger F. Sweetman's home, Blenheim Lodge, Ballymaclode, Co. Waterford. Blenheim in Ireland was on a substantial villa of thirty acres of land on the south bank of the Suir.

Blenheim House was taken down in 1937, but some materials were used in the construction of Mr. James Verran's house (a descendant of Roger F. Sweetman). Mr. Verran built his house where Blenheim once stood. Several pieces of furniture used in the house are still in Newfoundland today. A huge dresser and the Hand Desk that Sweetman used on board his ships for writing letters are at the museum in St. John's. The safe which Sweetman used to maintain many of his documents which was stored at Castle Hill Historic Park has been donated to the O'Reilly House by Parks Canada and is on permanent display.

We have 72 guests and no members online